The Ada Ceschin Foundation was established in 2002 to disseminate knowledge of Far Eastern culture in the West, and to also ensure a suitable location for works of art and cultural material collected by Rosanna Pilone during her many journeys to China. To pay her an appropriate tribute, in 2014 the Foundation’s Board decided to change its name by adding the name of the expert sinologist. Hence, today it is called Ada Ceschin and Rosanna Pilone Foundation. 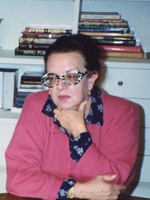 Rosanna Pilone (1931-2006), journalist and sinologist. Even as a young girl she was interested in all forms of Eastern culture, especially philosophy, literature and drama. In the 1960s she worked alongside journalists and correspondents who were experts on the subject. For many years she was a member of Mondadori’s non-fiction editorial staff. She then provided freelance professional services to publishing firms, accepting the responsibility of the Arts page and of cultural columns for dailies and periodicals. She has published several articles and essays, ranging from modern translations of original Chinese classics to the philosophical thought of Confucius and Lao-Tse, to Chinese literature under Mao, and Chinese drama. She was acknowledged as an expert of the latter over the years.

Ada Ceschin was Rosanna Pilone’s mother. She was born in Venice in the early 1900s into an ancient, firmly established Venetian family. She grew up in Venice, where she attended the Cà Foscari University. Talented with creative flair, as a young woman she produced drawings and decorations, which were used to create precious fabrics and embroidery–she partnered Olga Asta’s fashion house–and even cassocks for priests. In the 1920s she met Giuseppe Pilone, a brilliant student of economics at the same university, who was close to Count Cini. She married Giuseppe Pilone in 1929 and moved with him first to Rome and then to Milan to support him in a successful professional career as banker and financial expert. They had three children, and Rosanna was one of them.